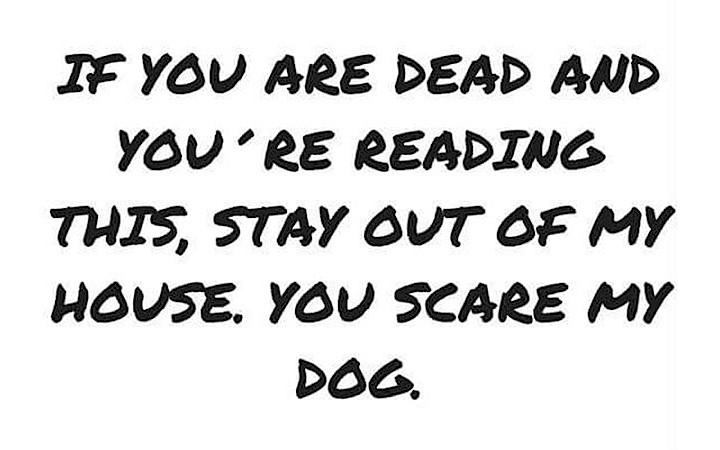 I posted this sign on my back door many years ago. Why? Because we had what we diplomatically called a “spirit problem” at my house. I was not the one to figure this out, my dog Gunny was.

We had lived all over the world with Gunny in many different houses without issue. He and his brother were flexible and always settled in quickly to a new place. They were content just to be with us.

When we moved to the house on Pyle Road where I decided to build my dog swimming pool, Gunny started behaving strangely. He would refuse to come in the house after a walk and when we opened the door, he would take off running down the street. He would also go down to the basement and hide under my husband’s desk. All these behaviors were new, and moreover, he was my twin who never left my side and was now getting away as fast as possible if we were near the house! So, it was very alarming behavior.

One of my friends suggested that perhaps there was a spirit or a ghost in the house. I was neither a firm ghost believer nor a ghost denier then, but that possibility had never crossed my mind. I became a believer pretty quickly, though, because as it turns out, Gunny’s discomfort was just the start of a bizarre series of events that left no doubt in my mind that I had accidentally bought a haunted house. It also convinced me that animals see spirits that we may not, perhaps because no one told them that they don’t exist or it isn’t possible.

If you would like to read our ghost story, you can download Chapter 12 of The Endless Path at no charge. If you want to find out what ultimately happened with our spirits, you’ll have to read Chapter 16!