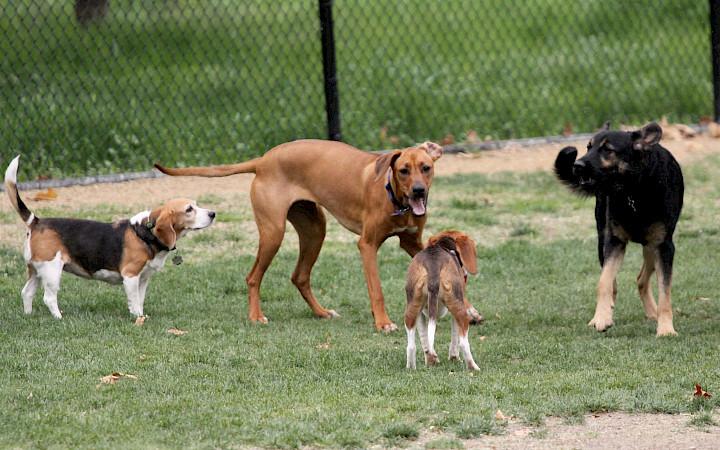 I don’t think all dog parks are good or bad. But I don’t have much experience at them because at our old house, we had a neighborhood full of dogs who played together regularly, and Beau had a big yard to run in. I didn’t consider going to the dog park in our new city to be a no brainer, and I wanted to be open-minded and give Beau a chance to make some new friends. Good goal. Poor execution.

I am human; no matter how much we all know, we still make mistakes. My mistakes were pretty common. They are all covered in this article. It is not that I didn’t know better, it is that I made some poor decisions when confronted with a complicated situation. We all have to seek information, but it is even more important to have the confidence to act in accordance with what we know.

Mistake 1: I entered a dog park that was noisy and large, where I couldn’t see everything that was happening

I liked the fact that this dog park was very big with high fences so Beau wouldn’t be crowded and he couldn’t jump the fence for fun. What I didn’t realize is that it extended even further than I thought, under two freeways, and cars overhead sounded an awful lot like constant thunder. It was also very hot and humid, which doesn’t help anyone’s humor.

I could see about 6 or 7 dogs in the distance. A couple looked like they were playing. But at 100 yards away, I didn’t have a good read on what everyone was doing. So I released Beau and we started making our way towards them.

Mistake 2: I ignored my uneasy feeling about these dogs and these people

Several dogs immediately surrounded Beau to start sniffing him, and he had his tail between his legs. I tried to keep him moving, but one dog in particular – an unneutered male – kept circling and trailing Beau. I kept standing between that dog and Beau, firmly saying “give him some space” but was ignored. I have no idea who the dog’s owner was. Part of the mistake in entering was that there were people reading books and talking on the phone, completely ignoring their dogs. By no means are all unneutered dogs a problem (in fact it is often an intact dog that gets attacked by neutered dogs) but this one was. By no means are all bully breeds a problem, but this one did not exhibit one friendly behavior and had a 30 pound weight advantage. He was stalking Beau and Beau kept moving away from him.

I thought maybe we could go to a corner and Beau could retrieve and enjoy being off leash. So I tried. Three dogs ran to where Beau was looking for his ball and circled him again. He was uneasy and I was uneasy, and now I was over 100 yards from the exit with a bunch of dogs between us and the gate. Two unneutered males were following Beau wherever he went, sniffing him and crowding his space. No owner in sight. Again, I kept putting myself between the dogs and Beau and consciously tried to make my energy really large, telling them to go away. It was somewhat effective, but they would then come right back.

Mistake 4. I didn’t speak up to the inattentive owners and enlist their help

We started heading to the exit at a normal pace as I didn’t want to start running. We passed people just standing around but I didn’t say anything! I was as uneasy as Beau at this point, and the thundering noise of the cars overhead was distracting. I let Beau go ahead of me, threw the ball a bit, and watched his back. The same dog kept coming back around and I really just blew up my energy and said in a very low but firm voice “Get away. Go away.” I couldn’t walk forward without turning my back on the dogs that were trailing us, so I kept checking over my shoulder. Finally, the problem dogs headed the other direction and we got to the exit gates – both of which were left open, which tells you about all you need to know about the people who were in that park.

My number one job is to protect my dog. To make good decisions and keep him out of harm’s way. Today, I let Beau down. I told him I was sorry. I will not let it happen again, while being grateful nothing really terrible happened.