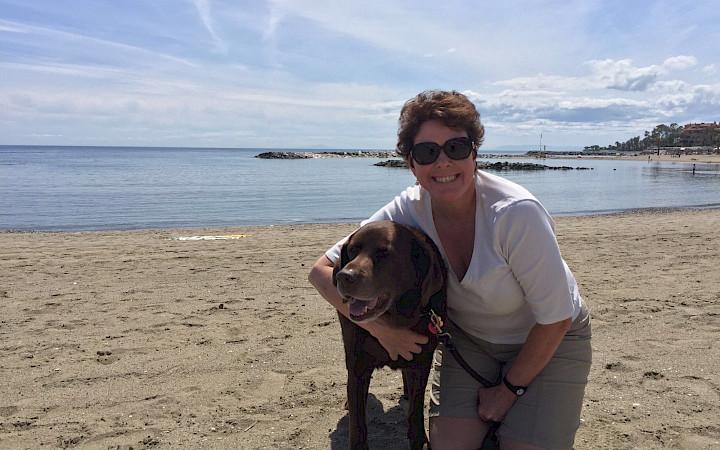 If you have read The Endless Path, then you know that I did not enter into a relationship with my dog Gunny with any expectation that it would change my idea about what is or isn’t possible in the Universe. I just wanted a dog to love.

And Gunny and I certainly didn’t write our book to try to convince you to change your beliefs. We just wanted to share our story. However, we will openly confess to being happy to provoke thought about what is in fact possible. And whether when we limit our belief about what is possible, we simultaneously limit our ability to perceive all that is around us. For example, if you don’t believe that ghosts can exist, then you can’t see them. But if you believe that they at least might exist, then maybe you can and will see one if it is there.

I think one of the great things about The Endless Path is that you can read it as though it were fiction, or a metaphor, and really enjoy it. Or you can choose to believe parts of it and not other parts of it, and still say, “that was a great read” or “that resonates for me because that is how I feel about my dog.” As a reader, these are the choices we all get to make when we read books and it is one of the best things about reading as far as I am concerned. I don’t accept as true everything that I read, and I don’t expect you too, either.

As an author, however, I am stuck. I have to believe what I read in the The Endless Path because I wrote it! I don’t really have the luxury to believe only part of the very life I am living. I’m in for a penny or in for a pound. So for me, Gunny either communicated via an animal communicator or he didn’t. And if he did, I don’t get to pick and choose which of the things he said were “real”. He said all of them or he said none of them. And since he died, I either have an imaginary friend who I talk to, or I really talk to and hear Gunny’s spirit. I can’t have it both ways.

It has been five years since Gunny died. I would be lying if I didn’t admit that with the passage of time, not living with his magic on a day-to-day basis, it all becomes hard to believe, even for me. Some days, I wonder if it was all a dream.

Recently, however, Gunny showed up and planted me firmly back in the reality of what our relationship is, was, and always will be. He forcefully affirmed his powerful voice. He reminded me, in spades, of our once in an eternity connection that keeps us tethered to each other no matter where we are. And he did it with two words: thyroid cancer.

About two months ago, I was standing in my kitchen and as Dino (pictured above), my older rescue dog, walked past me, I had a very clear realization: he had thyroid cancer. I didn’t hear an audible voice. I just “knew” it. This seemed farfetched because first of all, he seemed just fine. Second of all, it is a pretty rare cancer in dogs. And thirdly, Gunny had it and it is rare enough that there is just no way one woman has two dogs that get it.

Even by my flexible standards of what is crazy, it was crazy to take my dog to the vet and state that I believed that he had thyroid cancer, based on no medical evidence whatsoever, because my dead dog sent me a message. The only way a vet could determine if Dino had thyroid cancer would be to do ultrasound or a CT/MRI. (Thyroid cancer in dogs doesn’t usually make their thyroid function abnormal. And for that reason, it is normally found only when the tumor is pretty large.)

But I couldn’t get it out of my mind. And Gunny was persistently reminding me and not letting me talk myself out of what I “knew,” even if I didn’t want to believe it. A few weeks later, Dino ended up in the hospital very ill, and our beloved vet, Dr. Mark, came to ultrasound him to try to figure out what was wrong. (As it turned out later, he had a tick disease.) As he was completing an abdominal ultrasound, I asked if he would ultrasound his thyroid while we were there. He asked, “Why would I do that?” And I told him the truth: “because I got a message that he has thyroid cancer and Gunny wants you to do it.”

Gunny would not let my embarrassment keep me from asking. Standing in that ultrasound room, Gunny’s presence was palpable to me. He trusted Dr. Mark more than anyone, and knew that he would do it if I asked and that it was important not to let the moment pass. Mark, being a nice non-judgmental person, smiled and obliged.

And there it was. A tumor on the left side of his thyroid. Same as Gunny’s. Small. Very operable. A chance to find it early and ward off a far worse outcome.

Dino had half his thyroid removed last week. The prognosis is pretty good. You never know with metastatic cancers, but all indications are that we got it in time. The surgeon said, “maybe this is what they all look like when they start, we just never see them like this.”

There is no easy explanation of how I stood in my kitchen that day and “heard” that Dino had thyroid cancer. After all that has come to pass, was I open to the possibility that it could happen? Sure. How could I not be? But I certainly didn’t sit down at a Ouija board and try to conjure up Gunny’s spirit or any other. I was just living my life. But without a doubt, I believe that Gunny or anyone else can communicate with me telepathically. That there is something bigger than what I can see with my eyes or hear with my ears. That I am connected to that something; a part of it. That we are all connected.

So, for me, my belief in what is possible allowed me to hear a very important message. Because I allowed for the possibility, Gunny probably saved Dino’s life last week. And that truth, for sure, is stranger than most fiction.

If you want to know more about Gunny’s story I invite you to read The Endless Path.