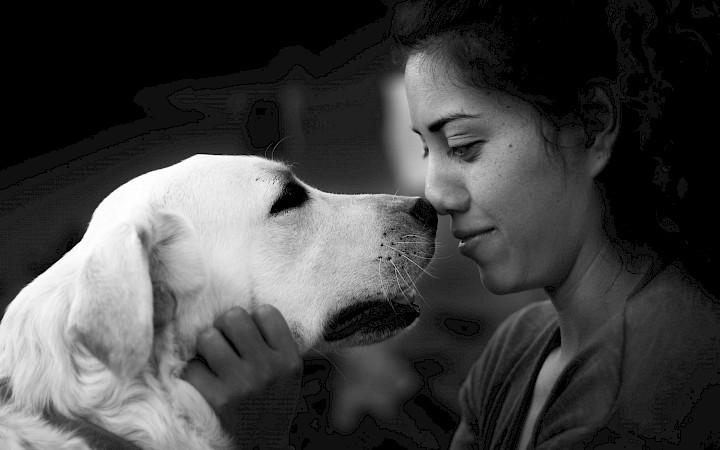 This is Part 4 of the Your Dog is Your Life Coach series.

Part 4: Learn from Your Dog

At this point, hopefully you’re paying closer attention to your dog and spending more time with him. I hope that you are finding it easier to understand what he’s telling you, and that you’re working hard to make yourself clear so that your dog can understand what you’re asking. Mostly, I hope that you’re feeling more like a team, communicating with less effort. Maybe your dog has more freedom to choose the direction he walks and when he wants to play. Even better!

Since the day you got your pup, you’ve been teaching him how to live in a human world. He probably knows to go outside to pee, not to eat the furniture, how to walk on a leash, not to jump on visitors, and how to sit, stay, and down. Great! But have you put the same effort into learning what your dog is teaching you? If not, it’s time to start.

When you approach your relationship with your dog as one where you have a lot to learn, as well as something to teach, you will be amazed at the wisdom they possess. Watch carefully. They have so many laudable traits. They’re literally incapable of lying. They live in the present moment. Those are big asks for people. So for now, let’s focus on some of the more subtle things they can teach us.

If you watch two dogs play hard, chances are somebody is going to get scratched or nipped in the melee. If they’re friends or well-balanced dogs, neither is going to get bent out of shape by these small mistakes. It happens. Nothing to merit a big discussion or a reason to stop hanging out together.

Next time a friend says something a little thoughtless or forgets your birthday, let it slide. We all mess up sometimes. No need to make a deal out of every mistake.

Communicate displeasure before it becomes a big deal

There is a common misconception that dogs bite without warning. That pretty much never happens. What usually happens is that a dog is warning and escalating those warnings in dog language, but they’re either not understood by the people he’s talking to or ignored. If you make a dog uncomfortable, he’s going to let you know. Maybe he’ll pull his lips back or harden his stare. If you keep doing what you’re doing, he might show more of his teeth or growl. With that, he’s telling you in a more serious way to stop what you’re doing. (Growling is not aggression; it’s communication.) If you continue on despite the warnings, you may find he mouths you or bites you. It is almost unheard of for a dog to go from relaxed to attack with nothing in between. Wish that we could say the same for people.

It takes a lot to make me really mad. You have to do something dastardly. The other way I end up really mad is if you continually say or do really hurtful things, but I just swallow hard and say nothing. That greatly increases the chance that when you say something hurtful again, I explode. That’s just not fair. If I would act more like a dog, then I’m going to gently let you know the first time you do something that really upsets me – the verbal equivalent of a fixed stare. The second time, maybe I say, “hey, seriously, don’t talk to me like that.” That’s a growl. If the person does it again, then the human equivalent of a bite to get them stop makes more sense because they’ve been warned and told to stop multiple times. But it’s not fair to verbally bite a person when you’ve given them no indication that they’ve upset you and not given them a chance to stop before you reach the boiling point.

We all hurt people from time to time without meaning to. It is relationship preserving to tell someone when they do, especially if it’s repeated. Doing so gives someone a chance to say “I’m sorry. I didn’t mean to hurt your feelings.” As importantly, it lets them know how to avoid upsetting you again.

When it comes to interacting with your dog, you can also warn them to stop doing something in ways that dogs understand. Saying “I’m not going to tell you again to stop it” really isn’t going to do the trick. You can change your tone of voice. You can ask them to sit or stay or drop it, if appropriate. If they still don’t respond, then you may have to forcibly stop them from doing what they’re doing – without biting or yelling.

Listen to your gut

Dogs, like many animals, work mostly from instinct. They’re connected to their environment in ways that humans often aren’t. They don’t overthink things. And they often sense danger long before we do. Remember how the elephants in Phuket, Thailand had all started heading up the mountain long before the tsunami struck? People were still playing at the beach and even went further out into the sea when the water was receding, and most of them ended up dead. If they noticed the strange sounds around them, they dismissed them.

I’ve never once regretted following my gut. That little voice in my head that says, “hold up a minute” needs to be recognized. Dogs do it naturally. We usually trust a dog’s instincts more than our own. If your dog growls at a stranger for no apparent reason, I bet you put a lot of stock in that assessment. Similarly, if he makes googoo eyes at a visitor, you probably relax.

We all have intuition and instincts. It’s usually better to heed them rather than try to rationalize away why something that doesn’t feel right is really okay.

Everyone looks forward to the moment when you open the door and your dog is waiting to greet you, tail wagging – even when you’ve only been out to the mailbox. We joke about it, but it’s one of the most amazing things about dogs. So many of us have experienced our dogs sitting with us when we’re crying or feeling down. Their abiding presence, maybe with a head resting on our lap, communicates so much love and understanding without words. When dogs feel an emotion, they show it. Lucky for us, they feel a lot of empathy and love when they’re living with kind people who love them too.

Let that be a reminder every day to tell people that you love them. Do something nice just to make someone’s day. Next time a friend calls you with a problem or a loss, just make some space for them to emote. Just be. Lots of times there’s nothing we can say or do to fix what’s wrong, but being there says everything. Lastly, love big. Maybe you start with your dog, who is unlikely to reject your love or not appreciate it. Let yourself feel all that love emanating from your heart, and let yourself receive it from your dog. It’s an amazing feeling to love and be loved, and the only thing that really matters in the end.

These are but a few of the amazing lessons that our dogs teach us through their actions. Your particular dog will have unique things to teach you, so heads up! The professor is right there on your sofa.